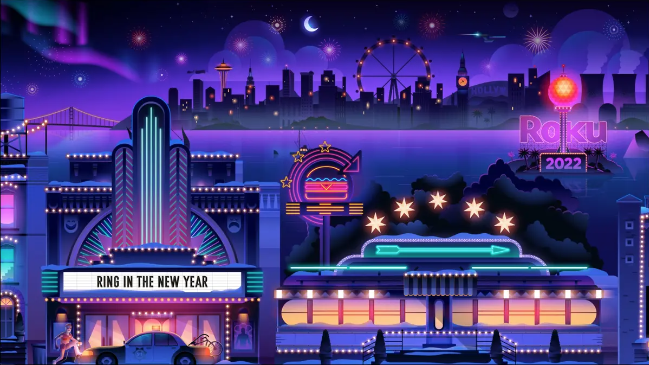 Roku background on the screensaver that depicts a moving cityscape has become quite popular on Roku; there are an infinite number of others from which to select. If you possess a Roku Smart TV or Roku Express streaming device, the screensaver has most likely been displayed dozens or hundreds of times on your device. When you switch on the TV, you will see what appears to be a hilly metropolitan landscape. You are aware that roku background hides easter eggs all over the city for remarkably perceptive viewers. There are a lot of individuals who, like you, are curious about the assortment of Easter eggs that will be available this year. Here we will discuss in detail the roku background.

An explanation of the roku’s history and roku background!

The Magnificent Ozma of Oz:

In the background of the screensaver is a panorama of the easily identifiable Emerald City. Therefore It’s located in the precise area to the right of the volcano and the left of the enormous robot. This made-up place plays a significant role in the 1939 film The Wizard of Oz. The ship in the harbour on the Roku screensaver presumably alludes to Pirates of the Caribbean, while there are several films with a pirate theme. That cinematic series has a terrifying encounter with the Kraken.

The boat with the shark fin may float in the screen’s middle water. It can be seen a short distance to the vessel’s right the Kraken is harassing. A 1975 film, “Jaws,” is the inspiration for this phrase. In my opinion, they will need a much bigger boat for this. Many Roku owners wonder what the tiny icons on their screen saver represent. The clock tower in Hill Valley is almost at that moment in the 1985 film “Back to the Future” when it is struck by lightning.

In the lake, right in front of the Emerald City, you can make out a tiny island with a single palm tree. If you squint hard, you might be able to make out a ball on the island. This hidden easter egg alludes to the Tom Hanks movie Cast Away. In case you missed it during the film, Wilson is the ball’s name. You can barely distinguish an individual dangling over the top of the Chrysler Building to the right of the Emerald City. The apparent reference here is to Spider-Man.

Extending a Glance to the Addams:

There’s a cafe and a movie theatre in the foreground, and the Addams family’s home is in the background. You can practically hear the catchy jingle that accompanies double-snap just by looking at it. It’s not the moon but rather an orbiting space station. The faint trace of a spherical space station may be seen in the backdrop of the picture, directly above the Hollywood sign. A bare minimum of detail is visible.

Immediately to the right of the massive robot, on a structure in the background, is a large globe representing the Daily Planet. When not saving the world as Clark Kent, Superman spends his time working there. Superman should have known that the most powerful superhuman on the planet loves to spend his free time as a journalist. One of the most apparent Easter eggs is the tower clock, whose hands are stuck at 10 o’clock at all times.

There may be a phone booth in front of the clock tower, but it seems to have fallen out of use for the time being. It is likely a reference to Dr Who, a famous British science fiction television series that has been airing for a long time. The programme’s main character travels through time using a time machine that looks like a telephone booth to have various experiences.

The scenario shown in this screensaver depicts a submerged submarine that is only partly covered by water. The Majestic, a film about a historical romance released in 2001, is referred to by the art deco theatre that can be seen in the background. The Hunt for Red October makes it quite clear that it is not impressed with Jim Carrey’s performance in serious roles.

Seattle is the city that never sleeps:

A staple of the Seattle cityscape, the Space Needle is easily recognizable. Moreover, it is a significant part of the plot of the 1993 film Sleepless in Seattle. Background island screensaver positions it far left. There appears to be a plane flying dangerously near the volcano in the environment. The 1990 Tom Hanks romance movie Joe vs the Volcano is referred to here. The Titanic, of course, is the topic at hand. This luxury liner went down in the North Atlantic in 1912.

Front and centre on the screen saver is a picture of the famous barbershop from the film of the same name. Everyone who has seen this outrageous film will recognize the setting immediately. Building Stark Tower was by far Tony Stark’s crowning achievement compared to designing that incredible suit of armour. The tower becomes the headquarters of Earth’s Mightiest Heroes after the events of the 2012 film “The Avengers” and is renamed accordingly. While viewing the current screen saver, you may notice the tower in the distance.

Four unique reptiles are in the picture’s foreground, each peeking out from behind one of the many pillars that decorate the dojo. The Teenage Mutant Ninja Turtles are comprised of four artists: Raphael, Michaelangelo, Donatello, and Leonardo. Donatello captains this team. Alcatraz is in the harbour between the two cities. 1979’s “Escape from Alcatraz” may be meant. “The Rock,” starring Nicolas Cage, was filmed there.

The Story of a Hobbit:

A dragon may be seen far out in the distance, circling a volcano. Even though there are many films with both dragons and volcanoes, I believe this to be a reference to Smaug from Peter Jackson’s The Hobbit adaptation. No one can turn a blind eye to this massive beast. Godzilla looks to be rising from the ocean to the right of Stark Tower in the backdrop. He has starred in numerous monster-themed films and is widely recognized as a cinematic legend.

It’s easy to distinguish King Kong, Godzilla’s deadliest enemy, from across the Pacific Ocean. Similar to the 1933 picture, he climbs a building and swats at biplanes in this adaptation. You can’t miss the UFO hovering over Big Ben right now. It refers to the scene in the 1996 film Mars Attacks in which a spaceship suddenly appears above the British Parliament. The sinking ship in the bay between the two cities is too large to ignore.

Many science fiction films feature massive robots; the one depicted wreaking havoc in the Roku screensaver is probably the Iron Giant from the 1999 film of the same name. However, he is not the type to go on a rampage frequently, so this decision stands out as odd.           The 1955 animated film “The Lady and the Tramp” is here. The film’s protagonists sit down to share a spaghetti dish and a passionate kiss when they accidentally bite into the same noodle at the exact moment.

The Roku background option is helpful if you don’t have a living room clock. Digital or analogue Roku user interfaces are available. It’s simple but valuable. If you don’t have a Roku TV that can automatically shut down after a specific length of time, you may at least “snooze” your screen with this simple black screensaver. It’s a good idea to verify that the TV is off before sleep. The roku background streaming player is well-known for its user-friendly interface but offers various valuable extras.

Can the roku background be changed?

Whether or it not is possible to purchase different Roku themes?

The Roku theme packs may be changed from the main menu by selecting Settings > Themes > Theme Packs. You can get a free space theme, a western theme, a jungle theme, a winter theme, or any other theme you can think of.