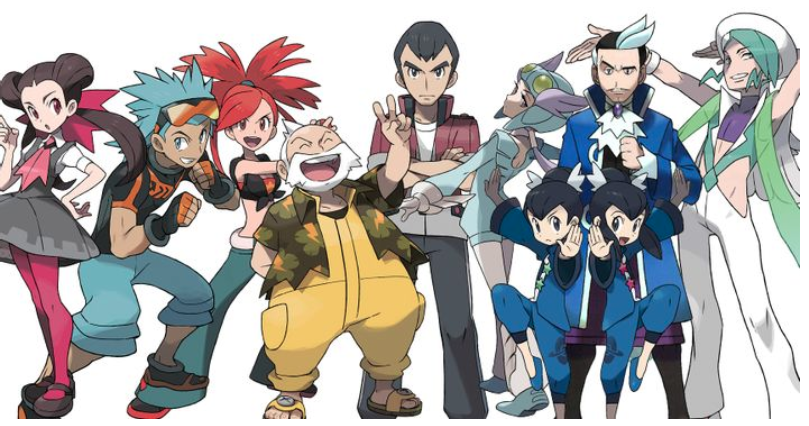 Hoenn gym leaders: In the Hoenn region, the Pokemon Generation III games have taken place. Players will be able to take on a variety of Gym Leaders. Ruby, Sapphire, and Emerald are the first three games. The Gym Leaders in Emerald are almost identical to those in Ruby and Sapphire, except for one minor difference: the roster and one Gym Leader. There are many other activities that the Hoenn Gym Leaders participate in. Because Omega Ruby and Alpha Sapphire were reimagining this game, the hoenn gym leaders have made a triumphant return in their new guises.

If you want to challenge the Pokemon League, you’ll need eight badges from eight Gym Leaders. As a result, it’s best to have a diverse squad to take on all of the elemental challenges simultaneously. Following are hoenn gym leaders in order:

The first Gym Leader is Roxanne, a Rock-type Pokemon expert, and she’s just a short walk away. Roxanne should be an easy first opponent with all three starters: she’s a student at Trainer’s School. STAB attacks from Treecko and Mudkip are extremely powerful, while Torchic obtains a potent second type upon evolution. Watch out for her Pokemon’s Rock Tomb attack, which always slows you down.

To find the Gym Leader, you must enter a dark gym and look for them. The route you’re on becomes a little clearer as you defeat more trainers. Along the way, you’ll discover that this gym specializes in fighting-type exercises. Brawly himself employs a Bulk Up move, which increases the Attack and Defense of his Pokemon by one level. If you’ve got a few Bulk Up enhancements, be wary of their strong Attack stats and moves like Knock Off and Arm Thrust.

Heat vents connect the gym’s two levels, making it a confusing maze to navigate. In this gym, everyone is a fire type. Even though Flannery’s team consists of several common types, they use the Overheat technique, which is extremely powerful – but each time, they drop their Special Attack by two levels, reducing the damage each of her Pokemon can inflict. Despite its huge Defense, her strongest Pokemon, Torkoal, doesn’t take much damage from Rock- and Ground-type techniques.

There are a series of doors in the fifth gym where trainers focus on a single stat. Norman utilizes two Slaking, which have a poor ability known as Truant, which keeps them completely inactive every other turn despite having some of the finest numbers in the game. Additionally, he summons Vigoroth, a Slaking-like pre-evolution with powerful attack and speed that can’t be hypnotized.

Before you face Winona, the Flying-type bird user in this gym, you’ll need to solve a door puzzle. Her formidable avian squad has a diverse mix of personalities and skills. Swellow and Pelipper have different sets of physical and special abilities.

Tate and Liza are the two Gym Leaders of this gym, which fights Psychic-types in a two-on-two matchup. To solve the primary puzzle, you must follow a predetermined conveyor course. The two Gym Leaders use the Rock/Psychic-type Pokemon Solrock and Lunatone to attack you. Your Water-type attacks will be weakened by Sunny Day, while you’re Flamethrower and Solar Beam will be boosted.

To get to the stairwells above Wallace’s Water Gym, you must walk through each piece of ice one time only. Wallace, the water-type trainer you encountered earlier in your battle with the Legendary Pokemon, operates this gym. However, there are many others.

There are numerous Gyms in Sinnoh where trainers can compete to earn badges and win battles against the Elite Four, just like in most other regions. Gardenia, Maylene, and Crasher Wake lead the Sinnoh Gym Leaders. Roark and Gardenia are the other Gym Leaders. From Diamond and Pearl through Platinum, the gyms in Eterna, Veilstone, and Hearthome have been rebuilt and improved. Some of the Gym Leaders in Platinum have more powerful Pokémon than in Diamond/Pearl.

There are eight gyms in eight cities in the Unova region. It would help if you defeated the Gym Leaders of these gyms to gain entry into the Unova Pokémon League. The gyms in Unova are unlike any other gyms in past generations since each one has a distinctive outside design that sets it apart. Depending on the starter Pokémon they choose at the beginning of the game, players encounter Cilan, Cress, or Chili as Unova gym leaders.

The Dynamo Badge and TM34 are yours if you win. There is also now the ability to demolish rocks with Rock Smash. To access New Mauville, return to Mauville City after obtaining Surf. Wattson will grant you this access. He will give you TM24 if you complete a task for him. Challenge the Pokemon League at Ever Grande City right now and take advantage of this opportunity.

What is the name of Hoenn’s sixth Gym Master?

Normal-type Pokémon are used by Norman, Hoenn’s fifth Gym Leader. When battling this Pokémon, it’s best to employ moves of the Fighting type.

Does Sinnoh fall within the category of a 4th generation device?

Pokémon Diamond, Pearl, and Platinum for the Nintendo DS, published in 2006 and 2008, are part of Generation IV and focus on the Sinnoh area.

Juan Pokemon is a mystery.

In Pokémon Emerald, Juan took over as Gym Leader of the Sootopolis City Hoenn Gym from Wallace.

Who Is First Gym Leader in Hoenn?

Hoenn has its first gym with the Rustboro City Gym. Roxanne, an expert in Rock-type Pokémon, serves as the team’s captain.